There are multiple design models to choose from and all of them have their own positive traits. The one that I used for this project was the Stanford Model from the Stanford Design School. The 5 modes of design thinking according to this model are Empathize, Define, Ideate, Prototype, and Test. In order to learn about each mode of the model, I worked through the design process with my own Problem of Practice. This was an eye-opening experience and I learned a lot along the way.

The key things I learned about the design process are…

In order to explain the process and how it works follow along as I focus on each mode of the model individually. I’ll share their meaning and how I worked through the mode for my project.

The problem that I started with is that my baking and advanced baking classes were too similar. Advanced baking was being run as a 2nd level of baking but it was quite repetitive in nature. The students covered all of the main baking information in the first level course so other than making more complex recipes there weren’t a lot of new areas to cover in advanced baking.

Empathy is important in the design model. It allows the designer to get to know the user to the extent that they can be sensitive to their feelings, thoughts, or experiences. If you don’t know the end user then the solution you design is less likely to actually solve the problem. Some ways that we can practice empathy are by asking questions, listening to stories, observing, and attempting to step into their perspective.

For my project, I decided to get a student perspective. They are the users of the curriculum and therefore their perspective would give the best clues to how effective it was and how well it was meeting their needs.  I started by giving each student a list of questions to answer and I encouraged them to be brutally honest in their responses. Not all of the students are comfortable speaking their minds aloud in a group setting and I wanted everyone to have input. Then while we worked side by side preparing doughs and batters during the remainder of the week I worked in lots of small group and individual conversations. I was trying to get even more information but I was careful to listen and not lead. 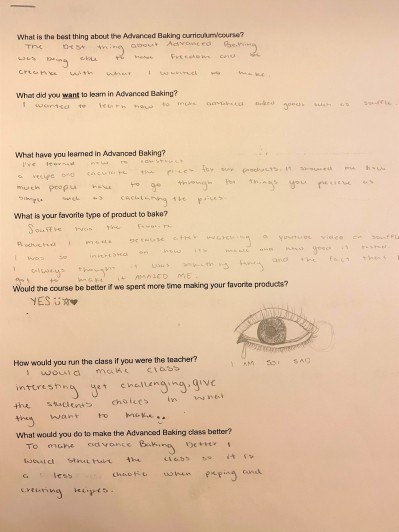 I learned that the students all felt that they learned a lot in Advanced Baking. They felt that some of the most positive parts of the course were the bakeshop experiences and the freedom to be creative and create new things. Students also identified areas of the course that they felt needed improvement. One of the recurring answers was that students want more time to work on the areas of baking they identify as either their favorites or the ones they need more time to perfect. They felt that they were restricted by the need to follow the predetermined units.

The second mode of the Stanford Design Model is to define. In this mode, you look at all of the information you collected from empathizing and then create a very specific definition of the problem. Sometimes it takes a lot of thought to really find the root of the problem and get a thorough definition.

For my project, I spent a lot of time reading through the student feedback and writing down the common themes. One that made a resounding impact on me was expressed by an energetic and curious student. I created this point of view framework to express it… 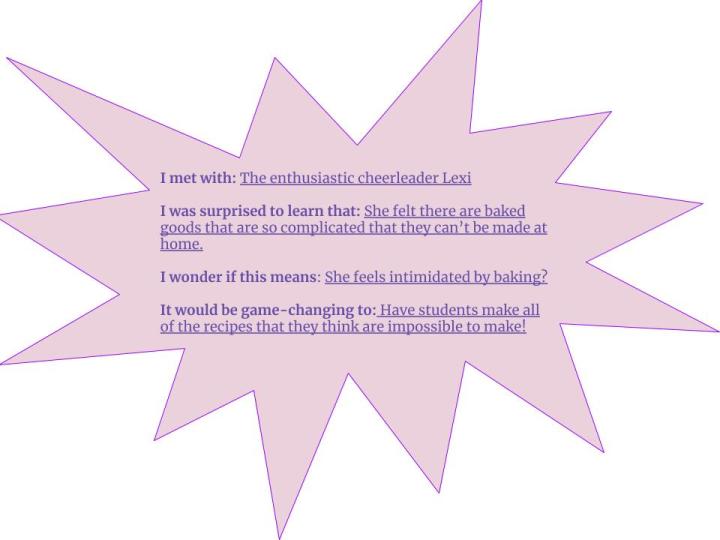 At the end of define mode, I was able to write a more specific statement of my Problem of Practice. My new statement became, “The Advanced Baking course is repetitive, dated, and skewed toward one area of baking.”

This is the mode where you get to start thinking about solutions. Creativity is a huge part of the ideate mode. It is important to include even the wildest ideas on your list and to be radical. Take some time to incubate your ideas. This means focus on them for a while and then set them aside. Your mind will still mull over the ideas in the background and an epiphany may happen when you least expect it.

I started ideation by presenting the Problem of Practice to my department coworkers and asking them to contribute their thoughts via post-it note on a poster I kept on my workroom desk all week. It was not possible for all of us to sit down together due to our schedules. 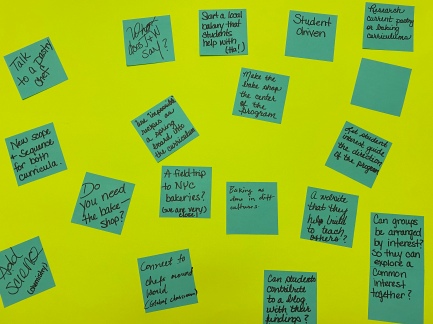 While waiting for my colleagues to provide their input to the brainstorming poster I spent time brainstorming as well.  I kept a journal of ideas that occurred to me as I allowed incubation to occur. As the weirdest times an idea would pop up and I would get excited and add it to the list. This process was exhilarating and enjoyable. The ideation mode gave me a chance to let the ideas fly with no concern for cost, administrative expectations, etc which can really get in the way of creative solutions.

Ideas start to take physical form in the prototype mode of this process. When you exit the ideate mode you have to focus your energies on the one best idea from your list. The idea that will solve the problem in the most effective way. Then you create a prototype based upon that idea as a solution to the problem. A prototype is a physical representation of your chosen solution.

For my problem of practice, I chose to create a new Scope and Sequence for the Baking and Advanced Baking classes that I teach.  I looked at what is taught at Johnson and Wales as well as a few other places in the United States. I also kept the empathy report in mind at all times so that my user feedback was reflected in the final prototype.

The part that really gave me struggle was making sure I wasn’t skewing the new scope and sequence in any one direction. The Baking curriculum covers the basic information about ALL areas of baking and the Advanced Baking curriculum takes it to the next level asking the students to use what they know to be creative, make new things, run a bakeshop, advance their cake decorating using more complex ingredients, and make super difficult sourdough bread.

The final mode of the Standford Design Model is testing. In this mode, you test your prototype and collect data that will help you to make improvements for the next prototype. The data collected does not have to be numbers. Data can be comments and suggestions from a focus group. The prototype and testing modes can become a bit cyclical until you perfect your prototype. It is highly unlikely that your prototype will work perfectly on the first try and that is OK.

To test my prototype I asked a mix of students and colleagues to look at the Scope and Sequence. My colleagues gave feedback to me via email.  The current Advanced Baking students provided feedback by making comments on a Goole Doc version of the prototype. Finally, my independent study students who have taken both the Baking and Advanced Baking courses in full joined me for a Google Meet session and had a focus group discussion about the prototype. I planned questions in advance but asked everyone to give feedback in any area in which they felt it was necessary.

My colleagues liked the Scope and Sequence and did not feel that anything needed to be changed. They especially liked the addition of the science experiments and taste testing to give students a real look (and taste) at how ingredients change a product. This was also the case with the independent study students who were the most experienced of all the students that provided feedback. One student commented, “I wish I could take the class again Mrs. K, you added some cool stuff”.

The Stanford Design Model provides a systematic yet creative way to solve problems. It encourages collaboration and gathering input from as many sources as possible. Finally, it works. I think it has immense application in the education field. If more people took the time to work through this model when creating their courses and big projects then the students would be getting the very most out of the lessons we as teachers are preparing for them. I intend to continue using it and have even found that it applies to problems at home.

This work by Jill Kalyankar is licensed under a Creative Commons Attribution-NonCommercial-ShareAlike 4.0 International License.